At the office we happen to have an old Small Factor Form PC. It’s an old small size desktop PC manufactured by Lenovo with the modelname ThinkCentre M55. It was primarily sold to business and consider it’s system specifications it would serve as an office PC. In our case we had a Lenovo ThinkCentre M55 with a Core 2 Duo processor and an old 160GB SATA hard drive. 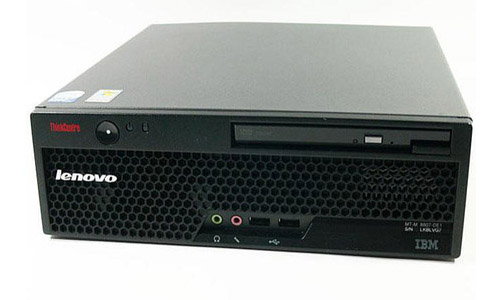 We think it would still be useful if Windows was running from a SSD instead of the old slow hard drive.

Even though HDD Caddy is mainly used in laptops, it’s actually also a great hardware storage solution for small factor form PCs. SFF PCs often use similar laptop dvd or blu-ray drives. Therefore you can switch the dvd or blu-ray drive from the PC with a HDD Caddy with an extra hard drive or SSD.

In this example we figured out that the ThinkCentre M55 actually use the same laptop optical drive as the ThinkPad R60. It also has the same Lenovo interface adapter connection. 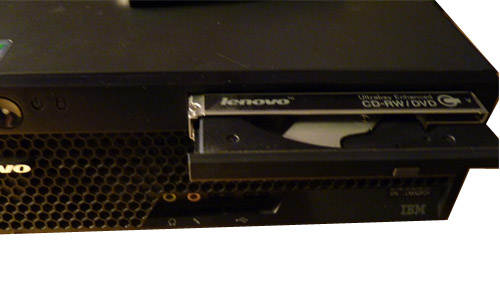 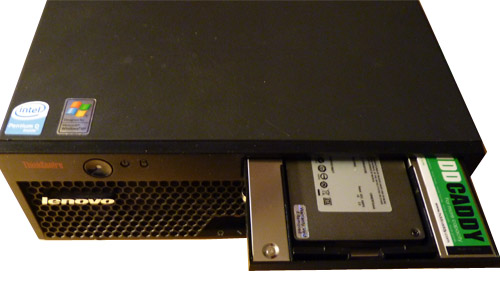 Before we can actually use it and install the operating system we had to change the BIOS settings. So we hit F1 as soon we boot up the system. Yay it works. The Crucial M4 is recognized as IDE drive 1. It is an old system and the motherboard still use IDE interface. IDE drive 0 is often configured as the Master drive (in this case you can only have 1 master drive). So the SSD is recognized as slave drive. That’s OK because we going to choose the boot order. 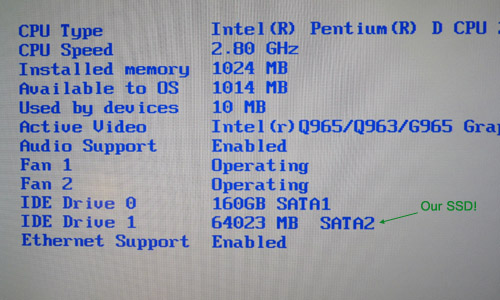 In boot sequence we can change the order of the boot devices. It is also possible that the slave drive is in the “excluded” list. You can move it to the included list by selecting the slave drive and press “x”. We put the SSD in the HDD Caddy as the first device so it will start with the SSD where we going to install the operating system (Windows in this case). 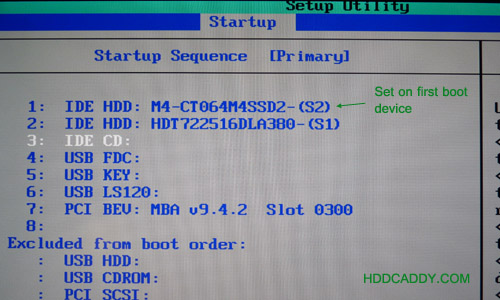 Now we are set and ready to enjoy a much faster system. Although the SSD is connected to the IDE interface you can still benefit from the much shorter access times. It will boot the operating system much faster, opens program in a second and you can open multiple files also a much faster. The IDE interface is limited in its transfer speed. So in terms of transferring large files you won’t find much benefit.

✔️ Fast shipping within 24 hours
✔️ Delivery from own stock. Our warehouse is in the Netherlands, Europe.
✔️ Our customers give us a 9.1 out 491 reviews
✔️ Excellent customer service